Hello, 2.5 years later and I am still working on Rema. I think my last update said the first book would be released in 2019, but obviously that has not happened. I mentioned the reasons in replies on my twitter page, but I'm posting here for anyone wondering what happened. I'm sorry it took so long for me to get around to it!

Book 1 is fully colored at 249 pages, with book 2 roughly 50 pages into pencils. Even with book 1 colored, my team and I decided it's best to wait until book 2 is nearly complete before setting a publishing date for the series. Part of this decision is due to books 1 and 2 being two halves of a single novel, and part of it is due to the unknown nature of how long it takes me to make a full color graphic novel. The timeline is especially up in the air considering the scope of the project, and the fact that I have two school-aged kids that still need me.

This means there is no official release date for the series, but it is actively being completed in the background. When a release date is solid without any chance of it being changed again, I will update everyone here and on my twitter page. I'm doing my best to make sure it isn't too too far in the future. 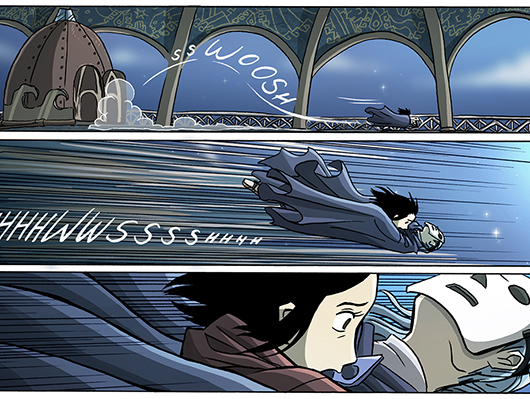 I had incredible help from two talented artists for book 1 -- Audra Furuichi and Emmy Toyonaga. Together we made the colors for book 1 really shine. There is no way I would've been able to do this without them.

I still have to pinch myself sometimes when I see the finished pages, because it feels like seeing an actual dream of mine come to life. It gives me the strange feeling that these characters aren't "mine" anymore, they are slowly leaving my hands and my head to become someone else's. It's hard to describe, but it's definitely a good feeling. In fact, it's the feeling I've been waiting for my entire life, carrying these characters and this world with me these last 27 years. It's why the project had so many false starts in the past -- I wasn't getting the sense the story was ready to leave. 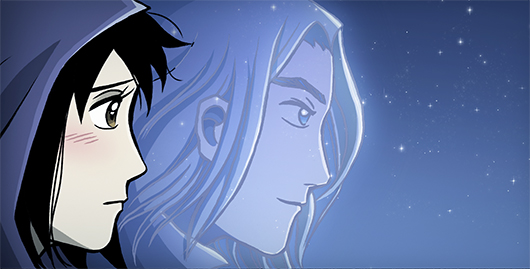 In summary, keep an eye on this page for an update on the final release date. I obviously can't wait to share all of this hard work with any of Rema's readers that still remain! I just want to be sure I do it right.

I'll be posting my usual sporadic check-ins on my twitter page. If there are any questions, feel free to leave them in the comments. Until then, I wish whoever is reading this love, peace, and happiness.

Posted by Amy Kim Kibuishi at 1:34 PM No comments: 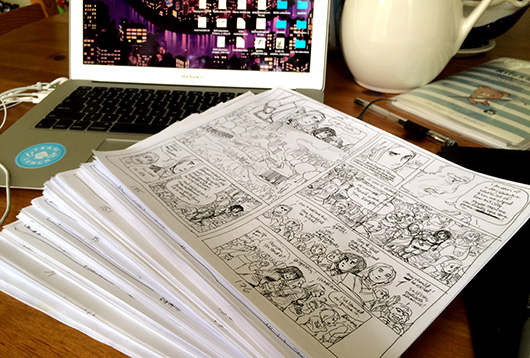 Hello! It’s been a long time since I blogged, but I might as well get right to it...

I’m so happy to announce Rema will be a YA graphic novel series put out by Scholastic Graphix, starting in 2019! I am directly adapting the novel I serialized online a few years ago, art and all, and I’m so proud of the work I’ve put into it so far. 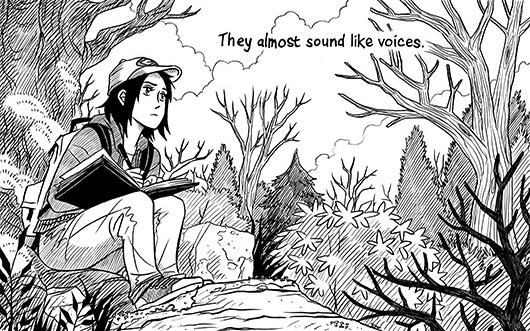 Some quick facts: The series is currently untitled, and I only use REMA as a work-in-progress title. The book is planned to be in color, but I will not color it. Colorist is to be announced. The first prose novel, for those few who read it, is being divided into two parts. I’m about halfway through the roughs and can say for the first time in a decade it truly feels Rema is in its destined final form. As an author, it is such an amazing relief!!! Every page drawn is like “yes! Finally!!” Is anyone really surprised Rema is ending up being a GN series, given my history? Well, I guess I am a bit surprised, but here I am!

The journey to complete this puzzling story is far from over, but many micro steps were taken to get Rema here, pulled along by many friendly forces. I’m compelled to give some thanks!

First, I have so much gratitude to my agent Judy Hansen, whose patience with me knows no bounds. Many thanks also to the wise, talented editors who gently rejected the novel version so I could find my way to THIS version, and to my colleagues, friends, and family who always had faith in me (especially Kazu, who was hinting at Rema’s comics potential way back when it was an online novel). I'm so grateful to Rema's new editor, the brilliant Cassandra Pelham, who gave this story more chances than I can count. I know for sure this book is in good hands. :)

Developing Rema has been such a long, intuitively-guided journey, I have so many people to thank that it would require an entire book in and of itself. More than anyone though, I want to thank the handful of readers who have followed Rema’s progress through the years – from when it was a webcomic in 2003, to when it was an online novel in 2012, and through its quiet travel home to Scholastic.

Your enthusiasm for Rema’s characters and world have carried it through many rough spots, and part of the reason I’m so passionate to work on it is because of you. So many times when I felt down about Rema’s progress, I would get a message or an email from a Rema reader, and every time it was like my energy was revived.

I haven’t met many of you, but I feel we share this world in this imaginary space, and I never felt alone while creating it. As I illustrate the action and romance in comics form, I think of how you might feel about the pages and I can’t wait to share them with you. 2019 seems so far away, but it will be here before we know it. I truly hope the graphic novel series will be, finally, worth the long, long wait!

In the mean time, I will be posting WIP snippets on my twitter account, and you can add the temporarily titled Tabby Charon #1 to your goodreads list, if you’re so inclined. Until next time, I hope your days are filled with love and peace!
Posted by Amy Kim Kibuishi at 4:04 PM 20 comments:

Rema is an illustrated novel I've worked on slowly over the years, culminating in a weekly serialization on this website in 2012/2013. The archives have been retired so the book may incubate in preparation for publication, self or traditional. This blog will serve as a production blog, a place for readers of the online novel to check in, and a place for updates, sketches, and excerpts.

Countless thanks to the readers who went through the online journey with me. You know who you are. This book exists because of your enthusiasm and encouragement. The only way I can express my gratitude is to make Rema the best book it can possibly be, and to follow through with books 2 and 3. I look forward to all of it! So please join me and check in periodically for updates. Rema is by no means gone forever, just entering a cocoon stage.
Posted by Amy Kim Kibuishi at 12:27 AM 8 comments:

Email ThisBlogThis!Share to TwitterShare to FacebookShare to Pinterest
Labels: blog

A Notice And A Thank You


In preparation for Rema's next phase of existence, whatever that may be, I will be retiring the Rema novel archives Monday, June 30th (next week). It's a decision that's been on my mind since serialization ended, since that was basically its broadcast run. This doesn't mean that you will never see the book again, but it does mean that the serialized online version won't be available after next week.

If you follow my Twitter account, then you know I've rewritten the beginning and have been working on streamlining the entire book. The one online doesn't reflect where the book is now, and to continuously update the rewrites seems a little overdone.

I'll keep this blog up as a production blog, with updates on Rema's status and drawings here and there, and as a place to keep in touch with the readers who still check in.

I can't thank you guys enough for this experience. I first put Rema online because I believed it was absolutely unreadable. Giving it away for free was me giving up on it, so that it would at least exist somewhere after working on it for so many years. I was very depressed at the time, and felt that I wasted many years chasing something that no one would ever care about.

When feedback started trickling in, I was seriously confused. Maybe they're just being nice? Maybe they're just nostalgic for the comic and will take what they can get? There's no way they actually want to read more. But then you kept coming back, kept being excited, kept cheering the characters on, and life was slowly breathed back into the project, and into me.

Writing is still so new to me. I've never taken classes for it, and I wasn't even very good in English and literary classes in high school and college. I was very much swimming alone in open waters. The pursuit of writing has been terrifying for me from the day I decided to do it. I nearly drowned but you held me up, and I'll be forever grateful to you for it. This book exists because of you, and I will not let it slip away without a good fight.

So while the online novel is going to be archived, this is by no means the end of Rema or even its sequels (there are at least two more books that need to be written!). I will definitely make a big post when the book is available to own, either as ebook, kickstarter, or published novel, that is still up in the air. Either way, don't be a stranger and check in once in a while for that update.

Again, I thank you all so much for traveling to Rema with me in this exciting format, and I will carry your comments with me throughout the rest of my writing career, wherever it may go.

Rema: a distant world of magic and beauty where the gods are slowly dying. The City of Water is held hostage as greed becomes the standard, and a race of elemental demigods are suppressed for their destructive powers.
It would seem all is lost if not for the chance estrangement of a singular Earthling girl. Her search for answers surrounding her father's death leads her to a painful truth, to gods, magic, war, and to an enigmatic blue-haired boy who is at the heart of it all.
Rema is a YA graphic novel series coming out in 2019 through Scholastic Graphix.

Amy Kim Kibuishi
Amy Kim Kibuishi (née Ganter) is the author/artist of Sorcerers & Secretaries, a two-book series for Tokyopop which was a YALSA Great Graphic Novel for Teens in 2007. She was also a contributor to the acclaimed Flight anthology series from Vallard, has adapted a story for Scholastic's Goosebumps Graphix series, and started her career as the lead character designer and comic artist for Playfirst/Gamelab's blockbuster game “Diner Dash.” Amy holds a degree in Cartooning from The School of Visual Arts and lives in Seattle with her husband Kazu and their two small children. All work represented by Judy Hansen, hansenliterary@msn.com